Nicholas Quinn Rosenkranz teaches constitutional law and federal jurisdiction, and he writes articles for the Harvard Law Review and the Stanford Law Review.

He is currently developing a new theory of constitutional interpretation and judicial review. The first installment, entitledThe Subjects of the Constitution, was published in the Stanford Law Review in May of 2010, and it is among the most downloaded articles about constitutional interpretation, judicial review, and/or federal courts in the history of SSRN. The second installment, The Objects of the Constitution, was published in May of 2011, also in the Stanford Law Review. And the comprehensive version is forthcoming as a book by Oxford University Press.

Rosenkranz has served and advised the federal government in a variety of capacities. He clerked for Judge Frank H. Easterbrook on the U.S. Court of Appeals for the Seventh Circuit (1999-2000) and for Justice Anthony M. Kennedy at the U.S. Supreme Court (October Term 2001). He served as an Attorney-Advisor at the Office of Legal Counsel in the U.S. Department of Justice (November 2002 - July 2004). He often testifies before Congress as a constitutional expert—most recently before the House Financial Services Oversight Subcommittee, regarding the Obama Administration's use of bank settlement agreements to circumvent the Appropriations Clause. He has also filed briefs and presented oral argument before the U.S. Supreme Court. His most recent Supreme Court brief, in Los Angeles v. Patel, was cited by Justice Alito in dissent.

The Subjects of the Constitution

Reconstructing First Principles: The Fourteenth Amendment and the Constitution 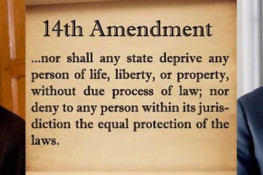 Have we stopped looking at the actual words of the Constitution? Professor Nicholas Quinn Rosenkranz...

Reconstructing First Principles: The Fourteenth Amendment and the Constitution

The Fourteenth Amendment dramatically changed constitutional law. How are we to understand these changes? Did...