In 1879, Connecticut passed a law that banned the use of any drug, medical device, or other instrument in furthering contraception. A gynecologist at the Yale School of Medicine, C. Lee Buxton, opened a birth control clinic in New Haven in conjunction with Estelle Griswold, who was the head of Planned Parenthood in Connecticut. They were arrested and convicted of violating the law, and their convictions were affirmed by higher state courts. Their plan was to use the clinic to challenge the constitutionality of the statute under the Fourteenth Amendment before the Supreme Court.

Which Rights Are We Mediating?

A review of How Rights Went Wrong: Why Our Obsession With Rights Is Tearing America...

Though it is not explicitly mentioned in the Constitution, the concept of a fundamental right...

Roe v. Wade: A Legal History | Part One: To the Court

"Uncommonly Silly"—and Correctly Decided: The Right and Wrong of Griswold v. Connecticut and Why It Matters Today

It is one of the Supreme Court’s most consequential and controversial decisions, and no one should...

Book Review: The Right to Try

Note from the Editor: This book review discusses the controversial concept of the constitutional “right...

Oddly, a smidgen of a statement by the President back in 2009, made on the...

[Return to Table of Contents] V. Constitutional Law Note: The Heritage Foundation has published a...

Note from the Editor: This article and the article in this issue by George W....

Abortion and the Courts

The Supreme Court has upheld the constitutionality of the Partial-Birth Abortion Ban Act, passed by...

The Workplace as a Front Line in the War Against Terrorism

The Federalist Society takes no position on particular legal or public policy initiatives. All expressions...

Blind to Text, Unfaithful to Principle

The most significant decision involving federalism that was handed down during the October 1995 Term--indeed,...

Speech by Judge Robert H. Bork at the University of San Diego Law School on November 18, 1985

Judge Robert H. Bork United States Court of Appeals for the District of Columbia Before... 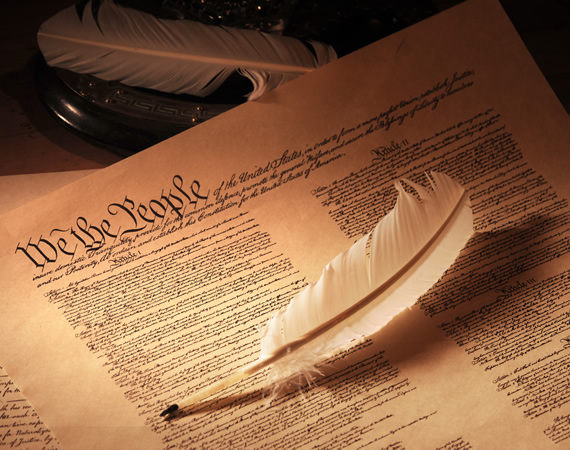