On May 14, the Supreme Court issued its decision in Murphy v. NCAA, striking down a federal law that blocks states from "authorizing" sports gambling under their own state laws. The ruling is a major victory for federalism, and has important implications that go beyond the issue of sports gambling. It is also notable that the ruling was a 7-2 decision, with liberal justices Stephen Breyer and Elena Kagan joining the five conservatives in the majority. It is the latest of a series of cases in which one or both of them have joined with the conservative block in showing at least some willingness to enforce structural constraints on federal power (a phenomenon I discussed in this article).

Murphy invalidates a provision of the federal Professional and Amateur Sports Protection Act (PASPA), which mandates that states may not "sponsor, operate, advertise, promote, license, or authorize by law or compact" sports betting. A coalition of sports leagues, including the NCAA, the NBA, the NFL, and Major League Baseball, filed a lawsuit arguing that New Jersey's 2012 and 2014 laws partially legalizing sports gambling within the state qualifies as "authorization" and thus violates PASPA. New Jersey, for its part, argued that that PASPA violates the "anti-commandeering" principles of the Tenth Amendment. Under several longstanding Supreme Court precedents, the Tenth Amendment prevents the federal government from compelling the states to enforce federal law, including by forcing state legislatures to enact laws of their own. PASPA was defended by an unlikely coalition of major sports leagues, and the Trump administration; unlikely because Trump has engaged in a war of words and Tweets against various NFL and NBA players, coaches, and owners who condemn his administration and (in the case of NFL players) kneel during the national anthem. The Supreme Court majority agreed with the sports leagues that New Jersey's law violates PASPA, but also agreed with New Jersey that PASPA is unconstitutional.

To get around the anti-commandeering doctrine, the sports leagues and the administration claimed that there is a distinction between commandeering and blocking "affirmative authorization" of gambling under state law. In their view, PASPA does not qualify as "commandeering" because it does not prevent complete legalization of sports gambling, but only state laws that affirmatively authorize gambling in some way, as New Jersey supposedly does by restricting it to some types of locations and limiting the range of teams that gamblers can bet on. Writing for a 7-2 Supreme Court majority, Justice Samuel Alito correctly concluded that this is a distinction without a difference:

The PASPA provision at issue here—prohibiting state authorization of sports gambling—violates the anticommandeering rule. That provision unequivocally dictates what a state legislature may and may not do. And this is true under either our interpretation or that advocated by respondents and the United States [which gives states somewhat broader discretion to modify anti-gambling laws]. In either event, state legislatures are put under the direct control of Congress. It is as if federal officers were installed in state legislative chambers and were armed with the authority to stop legislators from voting on any offending proposals. A more direct affront to state sovereignty is not easy to imagine.

Neither [the sports leagues] nor the United States contends that Congress can compel a State to enact legislation, but they say that prohibiting a State from enacting new laws is another matter....

This distinction is empty. It was a matter of happenstance that the laws challenged in New York [v. United States] and Printz [v. United States] commanded "affirmative" action as opposed to imposing a prohibition. The basic principle—that Congress cannot issue direct orders to state legislatures—applies in either event.

Here is an illustration. PASPA includes an exemption for States that permitted sports betting at the time of enactment,... but suppose Congress did not adopt such an exemption. Suppose Congress ordered States with legalized sports betting to take the affirmative step of criminalizing that activity and ordered the remaining States to retain their laws prohibiting sports betting.There is no good reason why the former would intrude more deeply on state sovereignty than the latter.

Justice Alito is exactly right. The distinction between legalization and "authorization" collapses under any serious scrutiny, because virtually any law that legalizes a previously banned activity, but does not completely abolish all restrictions on it, can be described as authorization. As Alito points out, neither the sports leagues nor the Trump administration could explain exactly where legalization ends and affirmative authorization begins. A decision upholding PASPA would essentially have gutted the anti-commandeering rule, as the federal government could easily get around it by adopting regulations preventing states from legalizing previously forbidden behavior, so long as the legalization law did not completely eliminate all legal constraints on it.

Murphy is also significant for state policies legalizing, under state law, other activities that the federal government may oppose, including marijuana use, possession of some types of firearms, and others. The federal government can no longer block such legalization by passing laws that require states to continue to bar these activities under their own laws. In many cases, the federal government can still ban various activities by making them directly illegal under federal law. But if it cannot rely on the backing of the states and their own laws, enforcing such federal prohibitions in dissenting states can be expensive and difficult. In practice, federal prohibition of gambling, drugs and other activities relies heavily on state cooperation and support. Last week's decision reinforces the constitutional rule that empowers states to deny such assistance.

Perhaps most importantly, Murphy v. NCAA makes clear that a majority of the Court is strongly committed to the anti-commandeering principle. That bodes well for state efforts to oppose commandeering (and perhaps other types of federal coercion) in other areas. The most notable currently ongoing examples are the sanctuary cities cases, in which the Trump administration has been trying to force state and local governments to assist federal efforts to deport undocumented immigrants.

Critics often claim that the Supreme Court's anti-commandeering jurisprudence has no basis in the text and original meaning of the Constitution. But, as legal scholar Michael Rappaport showed in an important article, these decisions have a basis in the Founding-era understanding of the word "state," which implied a sovereign authority that the federal government could not undercut by seizing control over the state's government apparatus.

Legal battles over federalism will surely continue. We are still a long way from where we should be on enforcing constitutional constraints on federal power. But this ruling is an important step in the right direction.

Author's Note: Legal scholar Garrett Epps has an interesting article discussing the implications of Murphy v. NCAA for the sanctuary cities cases currently being litigated in the lower courts.

Ilya Somin is Professor of Law at George Mason University and the author of Democracy and Political Ignorance: Why Smaller Government Is Smarter and The Grasping Hand: Kelo v. City of New London and the Limits of Eminent Domain. 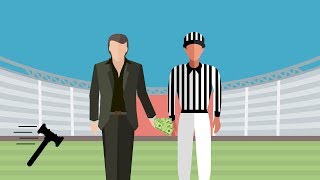