After reading Litterae Humaniores at Wadham College, Oxford, on a Rhodes Scholarship from 1971-1974, Paul A. Rahe completed a Ph.D. in ancient history at Yale University under the direction of Donald Kagan in 1977. In subsequent years, he taught at Cornell University, Franklin and Marshall College, and the University of Tulsa, where he spent twenty-four years before accepting a position at Hillsdale College, where he is Professor of History and Political Science and holds The Charles O. Lee and Louise K. Lee Chair in the Western Heritage.

Professor Rahe’s entire scholarly career has been focused on studying the origins and evolution of self-government within the West. His range is considerable. His first book, Republics Ancient and Modern: Classical Republicanism and the American Revolution (1992), was 1200 pages in length and surveyed the origins and development of self-government in ancient Greece and Rome, its re-emergence in a new form in the Middle Ages, the transformation it underwent at the hands of the political philosophers of early modernity, and the statesmanship of the American Founding Fathers. Within the first thirteen months of publication, the hardback edition sold out. Thereafter, it reappeared as an alternative selection of the History Book Club. In 1994, it was reissued in a three-volume paperback edition by the University of North Carolina Press, and it remains in print.

In the course of his career, Professor Rahe has published dozens of chapters on related subjects in edited books and scholarly articles in journals such as The American Journal of Philology, Historia, The American Journal of Archaeology, The American Historical Review, The Review of Politics, The American Journal of Business and Professional Ethics, The Journal of the Historical Society, The National Interest, The Woodrow Wilson Quarterly, and History of Political Thought. He spent two years in Istanbul, Turkey in the mid-1980s as a fellow of the Institute of Current World Affairs; he has been awarded research fellowships by the National Endowment for the Humanities and the Earhart Foundation; and he has held research fellowships at the Center for Hellenic Study, the National Humanities Center, the Woodrow Wilson International Center for Scholars in Washington, D. C. , Clare College at Cambridge University, All Souls College at Oxford University, and the American Academy in Berlin; and he has given a host of public lectures at universities in the United States and abroad – most recently at the Hebrew University and at Al-Quds University in Jerusalem, at the Sorbonne in Paris, at the Royal Military Academy at Sandhurst in England and the Free University in Berlin. In 1997-98, he was named to the Templeton Honor Rolls for Education in a Free Society by The John M. Templeton Foundation, and in 2006 the Society for French Historical Studies awarded him the Koren Prize for the Best Article Published in French History the preceding year.

Professor Rahe co-edited Montesquieu’s Science of Politics: Essays on the Spirit of Laws(2001) with David W. Carrithers and Michael A. Mosher, and he edited Machiavelli’s Liberal Republican Legacy (2006). His second book, Against Throne and Altar: Machiavelli and Political Theory under the English Republic, which examines the political thought inspired by the abortive republican experiment that took place in England in the period stretching from 1649 to 1660, was published by Cambridge University Press in April, 2008. His third and fourth books, Montesquieu and the Logic of Liberty: War, Religion, Commerce, Climate, Terrain, Technology, Uneasiness of Mind, the Spirit of Political Vigilance, and the Foundations of the Modern Republic and Soft Despotism, Democracy’s Drift: Montesquieu, Rousseau, and Tocqueville on the Modern Prospect, were published by Yale University Press in 2009. For his fifth book, The Spartan Way of War, which he hopes to have finished by the end of 2010, Professor Rahe has received a contract from Yale University Press. 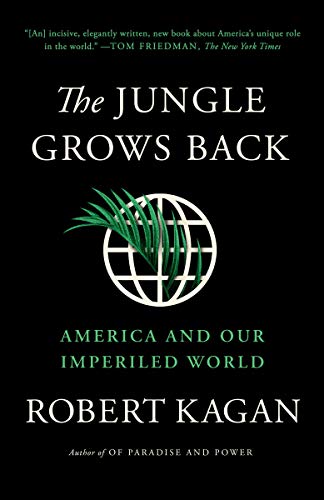 Book Review: The Jungle Grows Back: America and Our Imperiled World

Locke & Montesquieu: The Philosophers Behind the Founders

Where did the founding ideas of Washington, Madison, and Jefferson find their origins? How did...

Book Review: The Jungle Grows Back: America and Our Imperiled World