Frederick Schauer is David and Mary Harrison Distinguished Professor of Law at the University of Virginia, and previously was Frank Stanton Professor of the First Amendment at Harvard University. A Fellow of the American Academy of Arts and Sciences and recipient of a Guggenheim Fellowship, Schauer is the author of The Law of Obscenity (BNA, 1976), Free Speech: A Philosophical Enquiry (Cambridge, 1982), Playing By the Rules: A Philosophical Examination of Rule-Based Decision-Making in Law and in Life (Oxford, 1991), Profiles, Probabilities, and Stereotypes (Harvard, 2003), Thinking Like a Lawyer: A New Introduction to Legal Reasoning (Harvard, 2009), and The Force of Law (Harvard, 2015). The editor of Karl Llewellyn, The Theory of Rules (Chicago, 2011), and a founding editor of Legal Theory, he has chaired the Section on Constitutional Law of the Association of American Law Schools and the Committee on Philosophy and Law of the American Philosophical Association. In 2005 he wrote the Foreword to the Harvard Law Review’s Supreme Court issue, and has written widely on freedom of speech, constitutional interpretation, evidence, legal reasoning, and the philosophy of law. 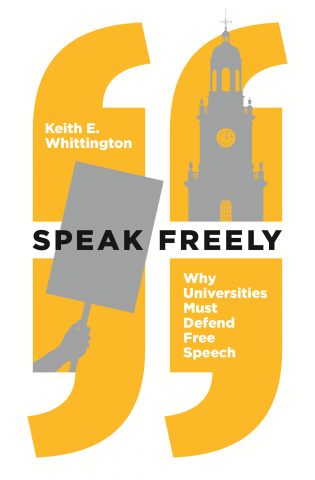 Arbiters of Truth: Corporate Speech Regulation in the Tech Age

In this episode of Bookshelf, Prof. Keith Whittington, the William Nelson Cromwell Professor of Politics...