SCOTUS decided Masterpiece Cakeshop this morning.  The opinion may be found here:  https://www.supremecourt.gov/opinions/17pdf/16-111_j4el.pdf

(2) Justice Kennedy’s opinion is very narrowly tailored to the facts of this specific case.  The Court found that the Colorado Civil Rights Commission violated the Free Exercise Clause because it was impermissibly hostile, disparaging, and dismissive towards the cake baker and his sincerely-held religious beliefs.

(3) One could reasonably read Justice Kennedy’s opinion as not so much pro-LGBTQ+ or pro-religious freedom, but rather anti-government agency hostility towards religion and sincerely-held religious beliefs.

“The outcome of cases like this in other circumstances must await further elaboration in the courts, all in the context of recognizing that these disputes must be resolved with tolerance, without undue disrespect to sincere religious beliefs, and without subjecting gay persons to indignities when they seek goods and services in an open market.” 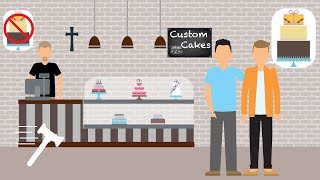