The Federalist Society is proud to present the 2020 Joseph Story Award to Professor Stephen E. Sachs of Duke University. The annual award recognizes a young academic (40 and under) who has demonstrated excellence in legal scholarship, a commitment to teaching, a concern for students, and who has made a significant public impact in a manner that advances the rule of law in a free society.

Brendan Anderson, a student at the University of Chicago Law School and the 2020 Joseph Story Award Chair there, presented the award to Professor Sachs. “Professor Sachs is a shining example of a professor whose scholarly abilities allow him to challenge pervading academic orthodoxy in an insightful and compelling manner,” said Mr. Anderson. Anderson also noted, “One student said that Professor Sachs changed his views from being ardently anti-originalist to being more accepting of originalism. In a world where polarization has made the idea of people changing their minds seem almost naïve, stories like this one show that when arguments are taken seriously and given their most persuasive case by people like Professor Sachs, real dialogue and influence is possible.”

Professor Sachs’s remarks in accepting the award suggest that this is no accident. As he explained, “I wanted to become a lawyer, partly from my dad’s example, but also because, as a lawyer, you could go into a library, do some research, make an argument -- and the hope is, at the end of it, the world would be different. This is the idea that Hamilton described in the very first paragraph of The Federalist No. 1 -- that societies might be capable of ‘establishing good government from reflection and choice,’ and not ‘forever destined to depend for their political constitutions on accident and force.’”

Prof. Sachs went on to note that his own involvement with the Federalist Society followed from this same process of persuasion. He said, “I’m particularly honored to receive this award because it shows something very special about Fed Soc, something that’s unfortunately in diminishing supply today. When I was a student, I wasn’t sure about joining Fed Soc. I was still figuring out what I thought about things; I would never have attended one of these symposia; and I would never have expected to receive an award like this one.“

But, Professor Sachs continued, “One of FedSoc’s true advantages, and the point I want to leave you with, is that this openness, this willingness to bring people in to think things through and get to better answers, is its extraordinary strength.” Sachs concluded: “In an age when disagreement is often treated like disloyalty, and when curiosity is often confused with cowardice, a commitment to open discussion and truth is like water in the desert.”

The award is named for Justice Joseph Story, who was appointed to the Supreme Court at the age of 32, served as the first Dane Professor of Law at Harvard, and wrote the Commentaries on the Constitution of the United States. It is the successor to the Paul M. Bator Award, established in 1989 in memory of Professor Bator for similar purposes.

Prof. Sachs joins a distinguished group of professors honored with this award and its predecessor.

The award is customarily presented in person at the Federalist Society’s student symposium. As the symposium is being held virtually this year, the presentation was likewise virtual, with a video and the text of Professor Sachs’s remarks available here, together with the text of Mr. Anderson’s remarks.

Click here to read the announcement from the Duke University School of Law.

Click here to read the congratulatory message from Prof. Will Baude through the Volokh Conspiracy. 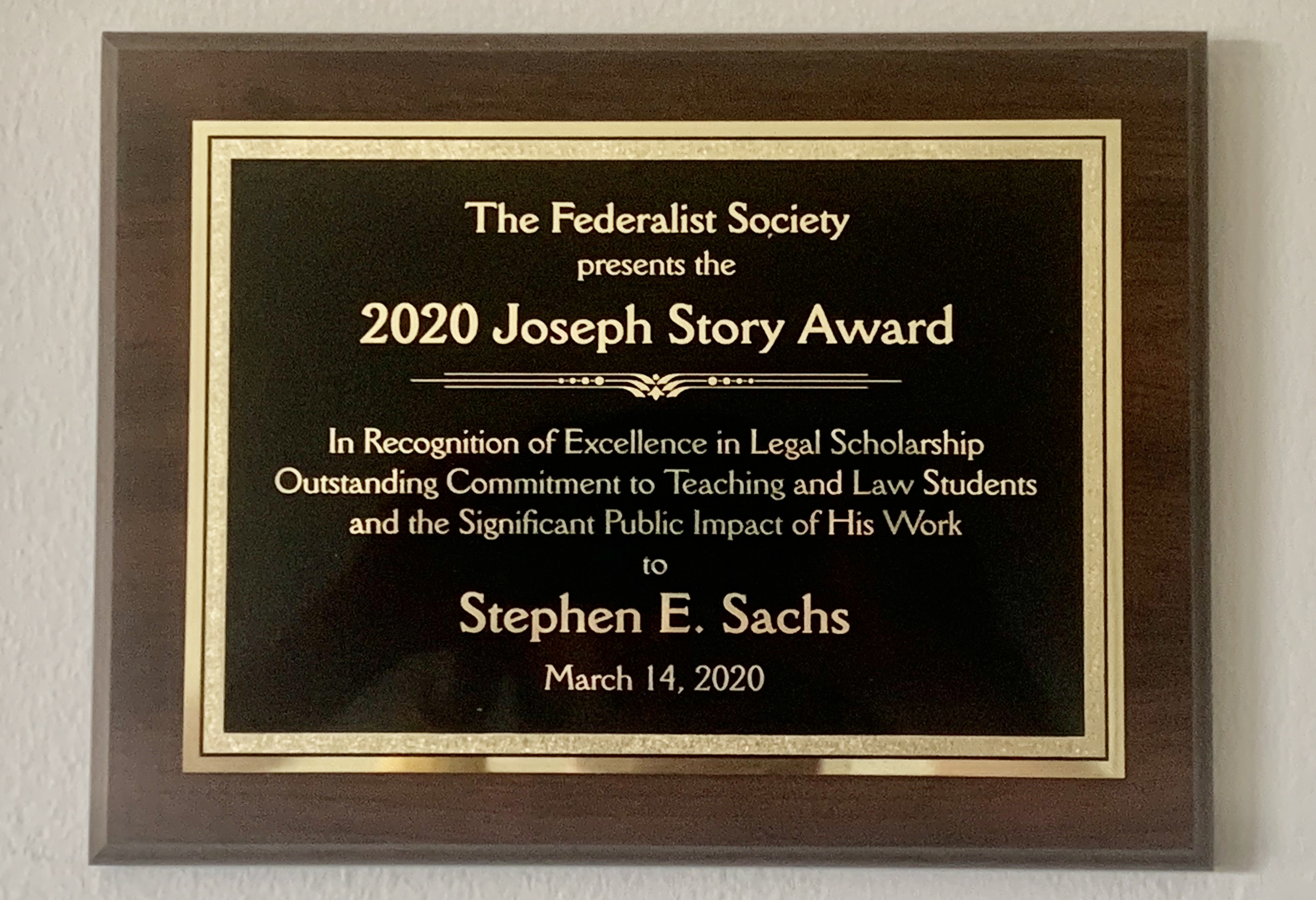 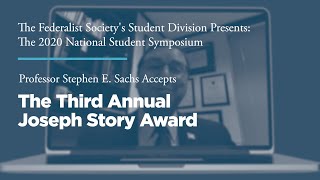