On June 25, 2019, the Federalist Society's Telecommunications & Electronic Media Practice Group presented an event on "Ownership Limits in an Increasingly Competitive Marketplace" at the National Press Club in Washington, DC. The second part of the event featured a panel discussion.

The Federal Communications Commission (FCC) sets limits on the number of broadcast radio stations an entity can own. As required by Congress, the FCC reviews its media ownership rules every four years to determine whether the rules are in the public interest and to repeal or modify any regulation it determines does not meet this criteria. There have been radical changes in the media marketplace since 1996 when the current local radio ownership limits were adopted. And in today’s changing marketplace – where some of the large companies in America, including Google, Amazon, and Facebook, are no longer on the audio marketplace sidelines – important questions have been raised as to whether existing limits need to be modified.

As always, the Federalist Society takes no position on particular legal or public policy issues. All opinions expressed are those of the speakers. 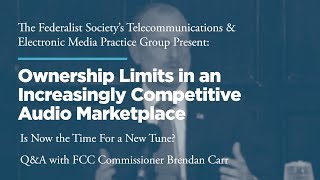