On Nov 6, 2019, the U.S. Supreme Court heard County of Maui, Hawai’i v. Hawai’i Wildlife Fund, which involves a dispute over whether the Clean Water Act’s permit requirement applies when pollutants originate from a concrete point but are only conveyed to navigable waters indirectly, via groundwater.

Under the federal Clean Water Act (CWA), someone seeking to discharge a pollutant from a “point source,” such as a pipe or well, into navigable water must first obtain a permit via the National Pollutant Discharge Elimination System program (NPDES).  The County of Maui, Hawai’i (the County), owns and operates four wells at a wastewater treatment plant that processes several million gallons of sewage per day.  Treated wastewater from the plant is injected into groundwater via these wells, and some ultimately enter the Pacific Ocean via submarine seeps.

Hawai’i Wildlife Fund and various other organizations filed suit against the County, alleging that it was violating the CWA by discharging effluent through groundwater into the ocean without an NDPES permit.  The district court agreed with the plaintiffs and the U.S. Court of Appeals for the Ninth Circuit affirmed, rejecting the County’s argument that no violation occurred because the pollutants did not issue directly from the point source (the wells) into navigable water (the ocean), but rather traveled indirectly to the ocean via groundwater.  The Ninth Circuit’s reading sharpened a split among the federal circuit courts of appeals on the proper interpretation of the CWA, and the Supreme Court granted certiorari to address whether the CWA requires a permit “when pollutants originate from a point source but are conveyed to navigable waters by a nonpoint source, such as groundwater.”

To discuss the cases, we have Glenn Roper, attorney at the Pacific Legal Foundation. 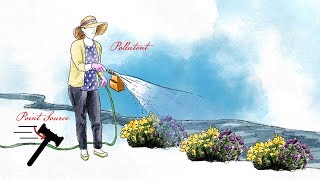