“Still, the promise of a jury trial surely meant something—otherwise, there would have been no reason to write it down.”

“So rather than dwelling on text left on the cutting room floor, we are much better served by interpreting the language Congress retained and the States ratified.”

“Really, no one has found a way to make sense of it.”

“Who can profess confidence in a breezy cost-benefit analysis like that?’

“When the American people chose to enshrine that right in the Constitution, they weren’t suggesting fruitful topics for future cost-benefit analyses. They were seeking to ensure that their children’s children would enjoy the same hard-won liberty they enjoyed. As judges it is not our role to reassess whether the right to a unanimous jury is “important enough” to retain. With humility, we must accept that this right may serve purposes evading our current notice. We are entrusted to preserve and protect that liberty, not balance it away aided by no more than social statistics.”

“In the final accounting, the dissent’s stare decisis arguments round to zero.”

And, now, for Justice Gorsuch’s peroration:

On what ground would anyone have us leave Mr. Ramos in prison for the rest his life?  Not a single Member of this Court is prepared to say Louisiana secured his conviction constitutionally under the Sixth Amendment. No one before us suggests that the error was harmless. Louisiana does not claim precedent commands an affirmance. In the end, the best anyone can seem to muster against Mr. Ramos is that, if we dared to admit in his case what we all know to be true about the Sixth Amendment, we might have to say the same thing in some others. But where is the justice in that? Every judge must learn to live with the fact that he or she will make some mistakes; it comes with the territory. But it is something else entirely to perpetuate something we all know to be wrong only because we fear the consequences of being right.

What would Chief Justice Hughes say of this writing? “Clear as a bell.” 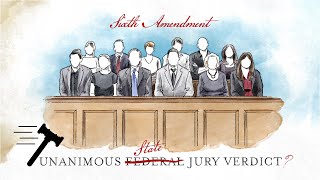