Above is the livestream feed for this study's panel event with the Center for Equal Opportunity and the Federalist Society's Regulatory Transparency Project. Click here for the referenced study.

In the landmark Bakke case (1978), “holistic admissions” was seen as a way to increase racial and ethnic diversity in a student body. The same theme was sounded in the 2003 and 2015 affirmative action cases, involving the University of Michigan Law School and the University of Texas at Austin. In holistic admissions, an admissions office looks at not just an applicant’s academic performance but also the person’s extracurricular activities, letters of recommendation, personal essays and interviews, and other soft matters.

In the 1920s Harvard College began to use holistic admissions to limit the number of Jewish students in a class. The school relied upon non-academic factors that it only vaguely discussed. No one explicitly said, “We have a Jewish quota.” But at Harvard (and Yale and Princeton) the Jewish quota was widely known.

Indeed, enrollment trends at MIT and Harvard, for example, suggest a ceiling on how many Asian Americans may attend a particular school. Ceilings are not inevitable, however, as can be seen at Caltech, which does not use race as a factor.

Using race preferences to achieve diversity in higher education was to be only a temporary project when such programs were begun five decades ago. Now, the practice is an entrenched part of college admissions at some of America’s most elite schools. Recent numbers tell a story of discriminatory treatment of Asian Americans because of their race and ethnicity as they pursue access to America’s best institutions of higher education.

Althea Nagai, Ph.D., is a research fellow at the Center for Equal Opportunity, which this week is publishing “Too Many Asian Americans: Affirmative Discrimination in Elite College Admissions." 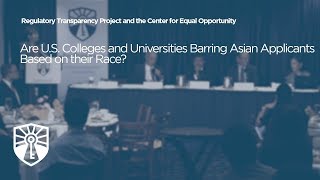