Tom grew up on his family’s cattle farm in Yell County. He graduated from Dardanelle High School, Harvard, and Harvard Law School. After a clerkship with the U.S. Court of Appeals and private law practice, Tom left the law because of the September 11th attacks. Tom served nearly five years on active duty in the United States Army as an Infantry Officer.

Tom served in Iraq with the 101st Airborne and in Afghanistan with a Provincial Reconstruction Team. Between his two combat tours, Tom served with The Old Guard at Arlington National Cemetery. Tom’s military decorations include the Bronze Star Medal, Combat Infantry Badge, and Ranger Tab.

Between the Army and the Senate, Tom worked for McKinsey & Co. and served one term in the House of Representatives.

Tom and his wife Anna have two sons, Gabriel and Daniel. 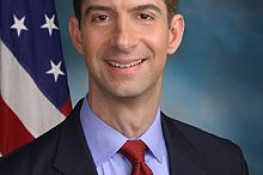 Senator Tom Cotton opened the 2017 National Lawyers Convention on November 16 at the Mayflower...

Senator Tom Cotton opened the 2017 National Lawyers Convention on November 16 at the Mayflower...

A key element of the Practice Groups' Executive Branch Review project is our annual conference....