James L. Buckley was born in New York City in 1923, grew up in rural Connecticut, and received his B.A. degree from Yale. Following service as a naval officer in World War II, he returned to New Haven to secure his law degree. After several years in private practice, he joined a group of small companies engaged in oil exploration abroad. He was elected to the United States Senate in 1970 as the candidate of New York's Conservative Party. He failed of re-election; but he has since served as an under secretary of state in the Reagan administration, as president of Radio Free Europe/Radio Liberty in Munich, Germany, and, most recently, as a judge on the U.S. Court of Appeals for the District of Columbia Circuit. He retired in 2000 and now resides in Bethesda, Maryland. 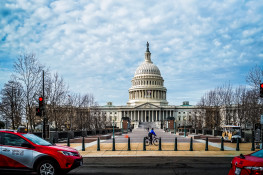 A Landmark Decision Turns 40: A Conversation on Buckley v. Valeo

Showcase Panel I: The Original View of Congress

Saving Congress from Itself: Emancipating the States and Empowering Their People

Federalism and the Scope of Federal Criminal Law [Archive Collection]

On September 9-10, 1988, The Federalist Society hosted its second annual National Lawyers Convention at...

Federalism and the Scope of Federal Criminal Law [Archive Collection]

On September 9-10, 1988, The Federalist Society hosted its second annual National Lawyers Convention at...

The Hon. James L. Buckley and Robert Gasaway recently joined us to discuss the current...

Do Members of Congress Have a Duty to Interpret the Constitution for Themselves?

Is Constitutional interpretation only a job for judges?  The Hon. James Buckley explains that both...

Showcase Panel I: The Original View of Congress

What was the founders' conception of the role of Congress? Was that conception clearly understood?...