Mr. Carlin has served as a top-level official in both Republican and Democratic administrations, most recently as Assistant Attorney General for National Security, the DOJ’s highest-ranking national security lawyer.  In this capacity, for which Mr. Carlin was nominated by the President and overwhelmingly confirmed by the Senate on a bipartisan basis, he oversaw nearly 400 employees responsible for protecting the nation against terrorism, espionage, and cyber and other national security threats.

Prior to assuming his role in the NSD, Mr. Carlin served as Chief of Staff and Senior Counsel to Robert S. Mueller, III, former director of the FBI, where he helped lead the FBI’s evolution to meet growing and changing national security threats, including cyber threats. Mr. Carlin also held positions as National Coordinator of the DOJ’s Computer Hacking and Intellectual Property Program and Assistant United States Attorney for the District of Columbia, where he prosecuted cyber, fraud, and public corruption matters, among others, trying more than 40 cases to verdict.

Mr. Carlin is an inaugural Fellow of Harvard Kennedy School’s Belfer Center for Science and International Affairs’ Homeland Security Project, focused on the unique challenges and choices around protecting the American homeland. He also chairs the Aspen Institute’s Cybersecurity and Technology policy program, which provides a cross-disciplinary forum for industry, government, and media to address the rapidly developing landscape of digital threats and craft appropriate policy solutions. Mr. Carlin was recently invited to address the governors of every U.S. state and territory on cybersecurity issues at the National Governors Association’s Winter 2017 meeting, and has been featured or cited as a leading authority on cyber and economic espionage matters by numerous major media outlets, including The New York Times, The Washington Post, The Wall Street Journal, The Los Angeles Times, USA Today, CBS’s 60 Minutes, NBC’s Meet the Press, PBS’s Charlie Rose and Newshour, ABC’s Nightline and Good Morning America, NPR, CNN, and Vanity Fair, among others.

Mr. Carlin, who joined DOJ through the Attorney General’s Honors Program, is a five-time recipient of the Department of Justice Award for Special Achievement, was awarded the National Intelligence Superior Public Service Medal by the Director of National Intelligence, and drew bipartisan praise, with U.S. Attorney General Loretta Lynch calling him “a trusted and tireless leader” and former U.S. Attorney General Michael Mukasey calling him “a superb civil servant.”  He earned his Juris Doctorate from Harvard Law School, where he received the Samuel J. Heyman Fellowship for Federal Government Service and served as Articles editor for the Harvard Journal on Legislation, and earned his Bachelor of Arts degree, magna cum laude, from Williams College, where he was elected to Phi Beta Kappa. 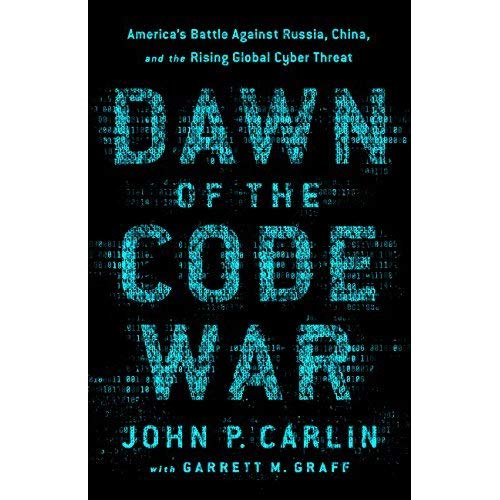