The Federalist Society notes with great sadness the recent passing of Judge Stephen F. Williams of the U.S. Court of Appeals for the District of Columbia Circuit. Judge Williams epitomized many of the judicial and academic virtues: a sharp intellect, a clear and interesting writing style, and the ability to hold views both strongly and civilly. His curiosity about ideas and about the world meant that he was always interested in learning new things. He was generous with his time, speaking not only at Federalist Society national events but to many of our student chapters. He will be greatly missed. Our condolences to his wife Faith and his family.

Below is a remembrance by Aaron Nielson, originally posted on the Notice & Comment blog and republished with permission here. Prof. Nielson is a law professor at BYU, a former clerk for Judge Janice Rogers Brown on the U.S. Court of Appeals for the DC Circuit, and a member of the executive committee of the Federalist Society's  Administrative Law Practice Group, as well as the chair of the Committee on Administration and Management of the Administrative Conference of the United States and the Co-Chair of the Rulemaking Committee, American Bar Association’s Section of Administrative Law & Regulatory Practice. The D.C. Court of Appeals has also published a statement on Judge Williams’ passing.

The Law Has Lost a Giant: The Legacy of Judge Stephen Williams

I’ve often said that this is the greatest opening line in the history of the D.C. Circuit: “In the Spring of 1985, as Mikhail Gorbachev was assuming the duties of General Secretary and inaugurating perestroika, the Federal Energy Regulatory Commission launched its own restructuring of the natural gas industry.”

The sentence reflects the best of the D.C. Circuit. It is interesting. It required real learning. And there isn’t meanness to it. It takes someone who loves reading and thinking and hard work to write that sentence.

That sentence, of course, was penned by Judge Stephen Williams — one of the finest judges the D.C. Circuit has been fortunate enough to call its own.

Judge Williams reportedly has passed away. By any measure, the law has lost a giant. Whenever Williams wrote an opinion, I paid special attention because I knew it would be worth my time.

Judge Williams, to his core, was a professor in the best sense of the word. He loved ideas. Williams was a law professor before he was appointed to the bench by President Reagan and his love of scholarship never stopped. Indeed, he recently wrote a book about the Russian Revolution. Reflecting his willingness to throw himself into new formats, he decided to blog about that book here at Notice & Comment! Here are his posts:

Peasant Land Ownership: The Context for Maklakov’s Sins of Omission

Lessons from Maklakov for Advancing and Protecting the Rule of Law

Read those posts — your mind will thank you. That is the work of a thoughtful scholar. And that is only a small part of the Judge’s contribution to humanity’s great store of knowledge.

Judge Williams, however, was more than just his brain. He also had a true professor’s heart. While I was clerking for Judge Brown, I learned about the “Williams Fellowship.” What that meant was the Williams clerks would spent a part of their year working with each other and Williams on new scholarship. As far as I could tell, his clerks loved him for it. It is not by accident that many (many) of the most significant voices in the academy clerked for Williams. A couple of years ago, I put together this list: 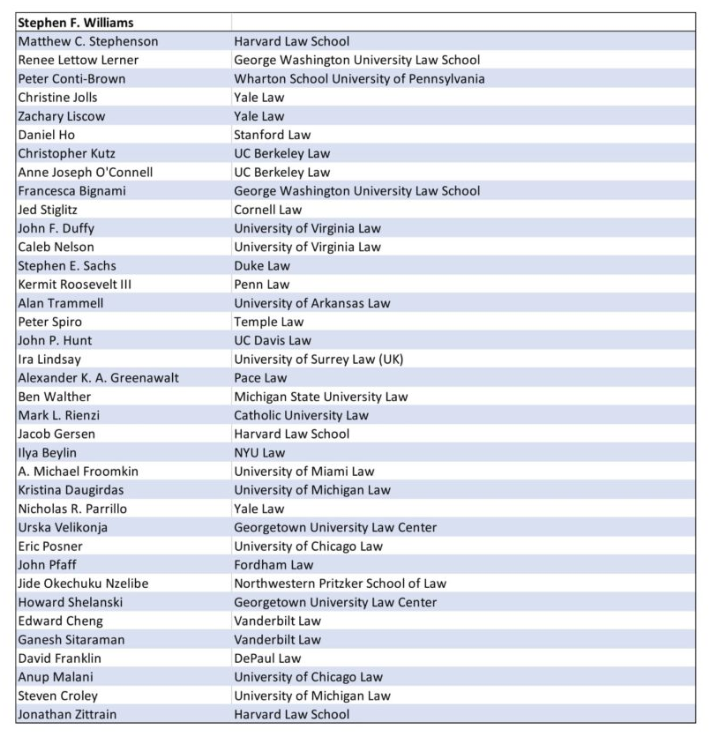 I’m sure that list is not even complete. But just a quick glance demonstrates the influence that Judge Williams has had on the academy.

Judge Williams was also a man of courage. He was not afraid to speak out to what he perceived as threats to liberty. I’ve often quoted this snippet from Williams about the practice of ordering someone who has committed an unfair labor practice to publicly confess: 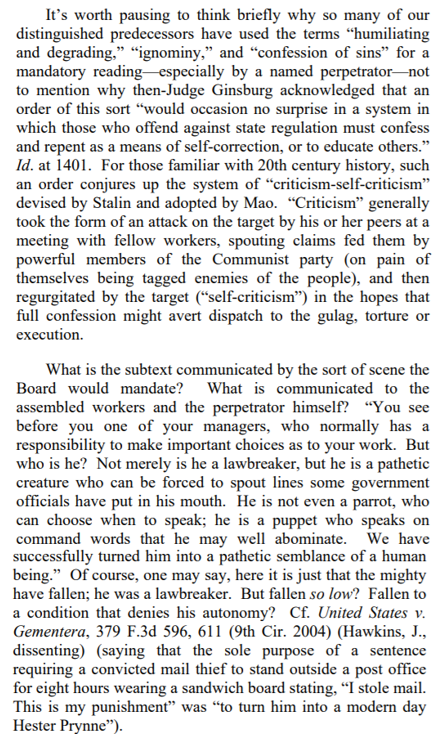 No doubt some folks will disagree with that conclusion. But that is a strong statement by a smart man who cares deeply about liberty.

That combination of learning, kindness, and heart made Judge Williams easy to respect. If you want to get a sense of how much his colleagues admired him, I urge you to read the transcript of his portrait ceremony (with thanks to the D.C. Circuit Historical Society).

Here are some of the highlights from Judge Tatel’s remarks: 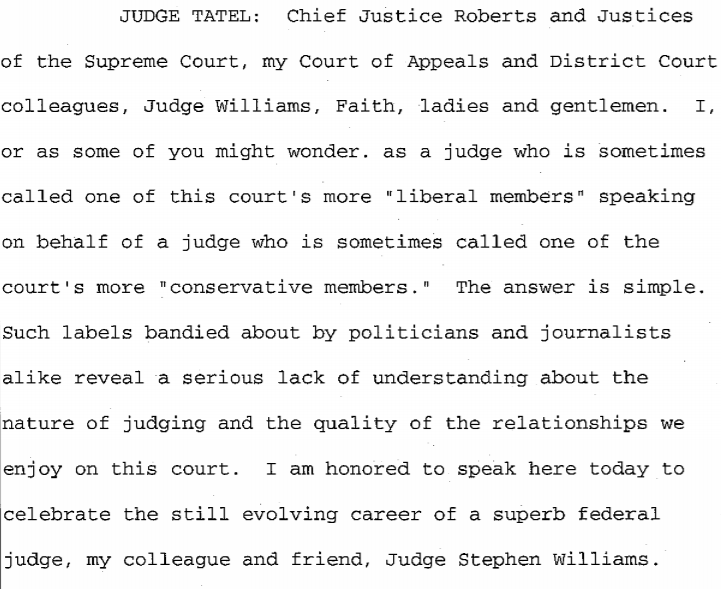 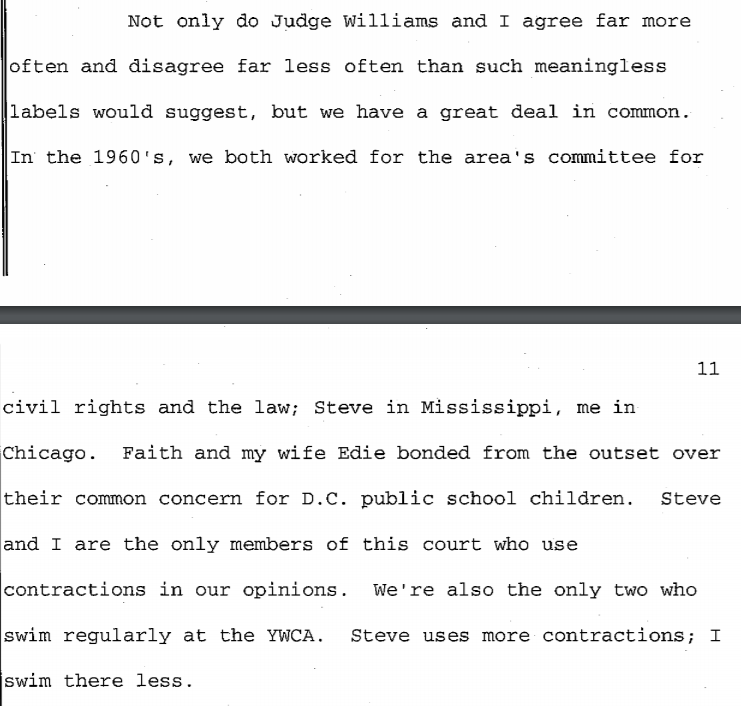 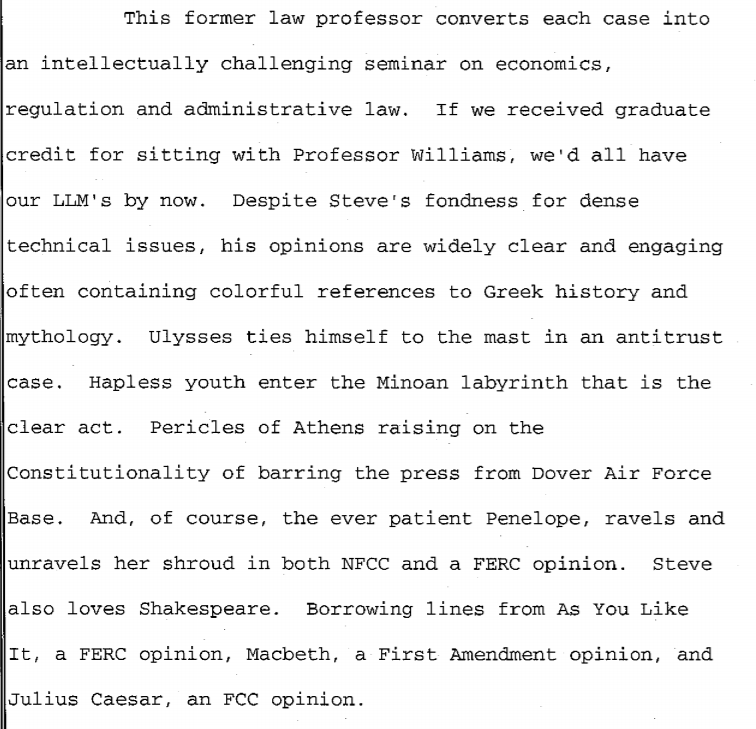 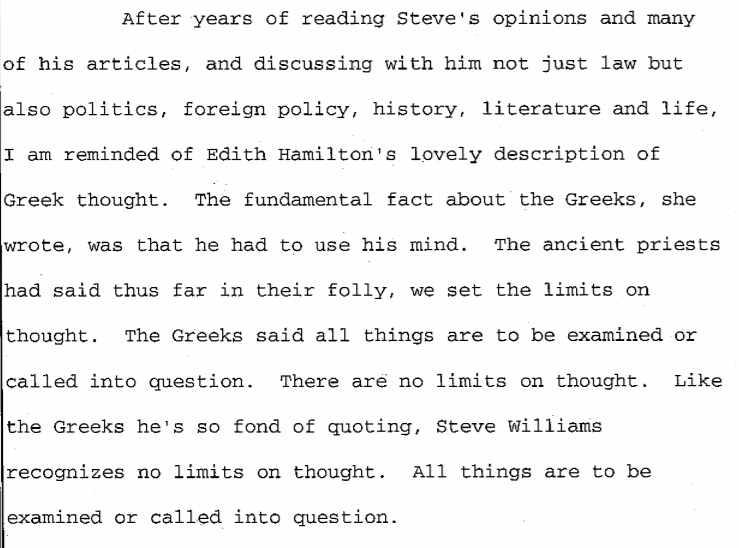 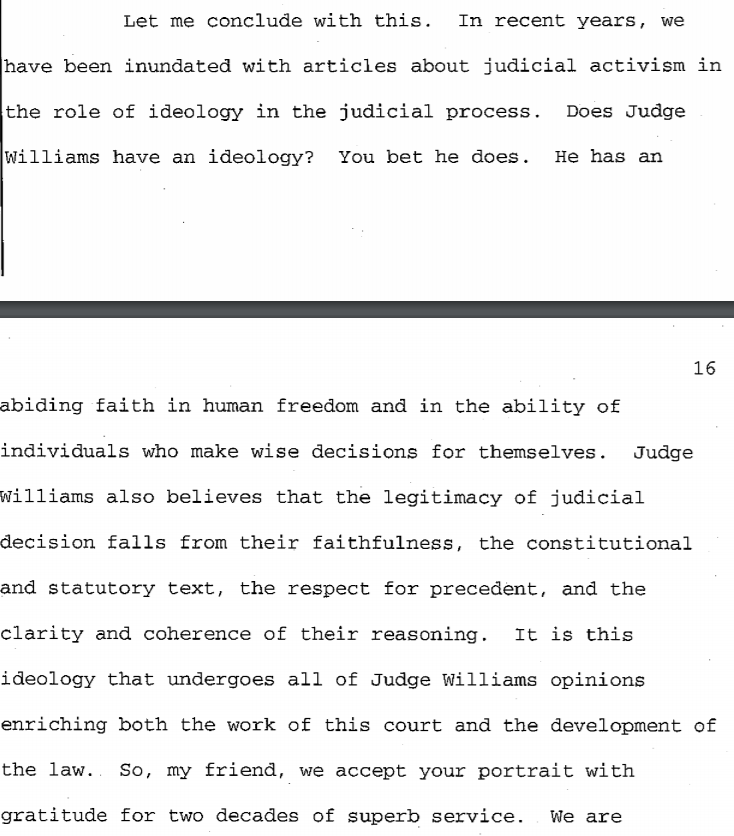 To all of this, Judge Williams replied: 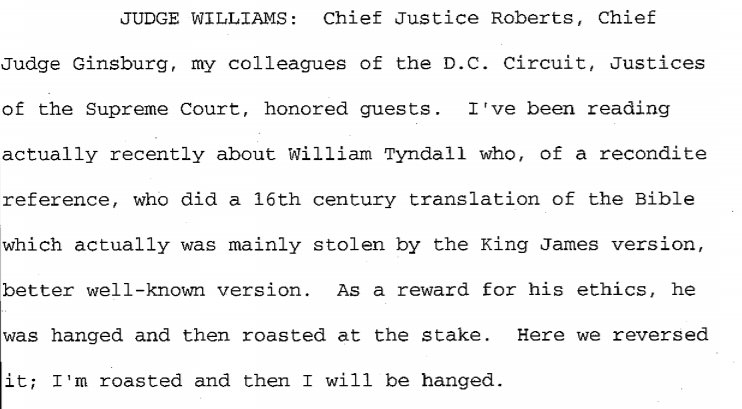 Judge Williams was a giant. He represented the best of the D.C. Circuit.