The Federalist Society is pleased to announce its Student Blog Initiative, a project of the Practice Groups and the Student Division. An inaugural group of eight students will contribute to the Federalist Society's blog throughout this academic year. Student contributors accepted into the program are held to the same rigorous standards as the regular and guest contributors to the blog, which exists as a forum for experts to provide thoughtful, balanced commentary in an engaging, accessible manner.

Each student in this select group drafts posts on legal, constitutional, and policy issues, receives feedback and revisions from volunteer experts, and has the opportunity to share his or her work on the Federalist Society's widely viewed platforms.

The Federalist Society takes no positions on particular legal and public policy matters. Any expressions of opinion are those of the authors.

The Federal Convention of 1787 represented the best and possibly the last opportunity to correct the flaws of the American constitution. Over the course of four months, delegates meticulously debated each clause in the document that they would present to the American people. James Madison, a delegate from Virginia, consistently voiced his opinion in these debates, and no institution captured his passion and attention more than the Senate. As debates about the structure of the Senate continue to the present day, it is useful to observe the institution’s development through Madison’s eyes.

Before the Constitutional Convention, in an essay called Vices of the Political System of the United States, Madison suggested that the nation’s failures stemmed in part from the states’ overwhelming influence on the federal government. For instance, he pointed to the federal government’s dependence on state funding, and he catalogued the states’ constant encroachments on federal power. Madison also criticized the Articles of Confederation’s mode of representation. In fact, near the end of his life, Madison noted that one of the “principal difficulties which embarrassed” the nation under the Articles included “the rule of suffrage among parties unequal in size, but equal in sovereignty.” Under the Articles, even the most basic legislation required the acquiescence of two-thirds of the states, and amendments required unanimity.

To reduce the states’ influence on the new national government, Madison and the Virginia Delegation proposed the Virginia Plan. The plan first divided the legislature into two chambers whose members would be apportioned based on population. The members of what would become the House would be elected by citizens, and the members of what would become the Senate would then be elected by the House out of a pool of candidates suggested by the state legislatures. Senators would “hold their office for a term sufficient to ensure their independency.” The plan also prevented federal officials from holding any state office during and for several years after their terms, and it even went so far as to allow the federal legislature to nullify state laws that encroached upon federal authority.

Madison believed that senators would serve as “the impartial umpires & Guardians of justice and general Good.” Consequently, at the outset of the Convention, Madison championed the Senate’s power. When the delegates balked at the idea of a federal legislative veto power over state laws, Madison suggested that the power be placed in the Senate alone. He also proposed that the Senate receive the exclusive right to appoint federal judges, and he voted to provide the Senate the exclusive authority to make treaties and originate money bills.

However, advocates for state power hampered Madison’s plans. John Dickinson, a delegate from Delaware, recommended that the state legislatures select Senators. Madison vigorously argued against this proposal, suggesting that such a plan would admit into the federal government all the vices and corruption inherent in the state governments. The only way to avoid such a calamity, Madison argued, was to maintain strict separation between national and state governments. But despite Madison’s efforts, Dickinson’s motion prevailed.

The passage of Dickinson’s amendment caused Madison to rethink the structure of the Senate. For instance, though his original proposal permitted a senator’s reelection, Madison now argued that senators should be ineligible for reelection. Moreover, he increased his opposition to states’ ability to recall senators and supported even longer Senate terms—up to nine years. Madison reasoned that such an extended term, along with ineligibility for reelection and protection against recall, would reduce state prejudices within the Senate.

The presentation of the New Jersey Plan and the eventual agreement to equal representation among the states in the Senate marked the final turning point in Madison’s thinking about the Senate. In a long and impassioned speech on June 19, Madison asserted that equal representation meant that the minority of American citizens—those residing in less populous states—would hold a disproportionate amount of power compared to the majority of citizens who resided in more populous states. Several days later, Madison argued that such disproportionate power would allow the minority to obstruct the majority, permit the minority to extort measures from the majority, and create an imbalance between Northern and Southern voting strength. This, Madison concluded, violated the principles of justice and irreparably undermined the new plan of government.

From this point forward, Madison sought to reduce the Senate’s power, hoping instead to rest “the collective interest and security” of the nation in the national executive. Those powers originally granted to the Senate Madison now desired to transfer to the executive. For instance, Madison argued that the executive should have the sole power to appoint judges and create treaties. Madison also hoped to reduce the Senate’s influence on the executive, arguing for the popular election of the president as opposed to appointment by the legislature. He additionally suggested that the Senate should have no role in impeachment proceedings against the president.

Ultimately, the Senate crafted by the delegates was far different from that of Madison’s original vision. And today, many of the Constitutional Convention’s arguments regarding the Senate, such as the appropriateness of equal representation among the states, are being rehashed. As such debates arise, we should continue to assess arguments in light of both Madison’s and modern experience. 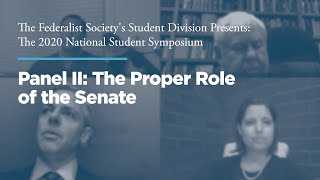