Review articles are published thanks to the hard work of our fifteen Practice Group Executive Committees and authors who volunteer their time and expertise. The Review seeks to contribute to the marketplace of ideas in a way that is collegial, accessible, intelligent, and original. Articles are available at fedsoc.org and through the Westlaw database.

We hope that readers enjoy the articles and come away with new information and fresh insights. Please send us any suggestions and responses at info@fedsoc.org.

NY v. HHS and the Challenge of Protecting Conscience Rights in Healthcare, by Stephanie Taub

The Mythical McCulloch, by Nelson Lund (reviewing The Spirit of the Constitution: John Marshall and the 200-Year Odyssey of McCulloch v. Maryland, by David S. Schwartz)

To Bear Arms for Self-Defense: A “Right of the People” or a Privilege of the Few? Part 1, by Stephen P. Halbrook

To Bear Arms for Self-Defense: A “Right of the People” or a Privilege of the Few? Part 2, by Stephen P. Halbrook

An Imagined Bloc and Other Figments, by Donald A. Daugherty (reviewing American Justice 2019: The Roberts Court Arrives, by Mark Joseph Stern)

As Far As Reasonably Practicable: Reimagining the Role of Congress in Agency Rulemaking, by Mike Jayne

Escaping the Goldilocks Problem: A Proposal That Would Enable States to Avoid Redistricting Litigation, by Dan Morenoff

Why Proportional Representation Will Not Stem Redistricting Litigation But Will Undermine Normative Representative Values, by Kevin St. John

The Evolution of Modern Use-of-Force Policies and the Need for Professionalism in Policing, by Arthur Rizer, Emily Mooney

Police Use of Force and the Practical Limits of Popular Reform Proposals: A Response to Rizer and Mooney, by Rafael A. Mangual

Ensuring Due Process at the Surface Transportation Board, by Lawrence J. Spiwak

The Resolution of Too Big to Fail, by Wayne A. Abernathy

After Espinoza, What’s Left of the Establishment Clause?, by Carl H. Esbeck

The Status of Use-Based Exclusions & Educational Choice After Espinoza, by Michael Bindas

How Can the FCC Improve Provision of Telecommunications Services for the Deaf and Hearing Impaired?, by Roslyn Layton

The Accidental Defender of the Constitution, by Andrew McCarthy (reviewing Defender in Chief: Donald Trump’s Fight for Presidential Power, by John Yoo)

Can Originalism Constrain the Imperial Presidency?, by Lee J. Strang (reviewing The Living Presidency: An Originalist Argument Against Its Ever-Expanding Powers, by Saikrishna Bangalore Prakash) 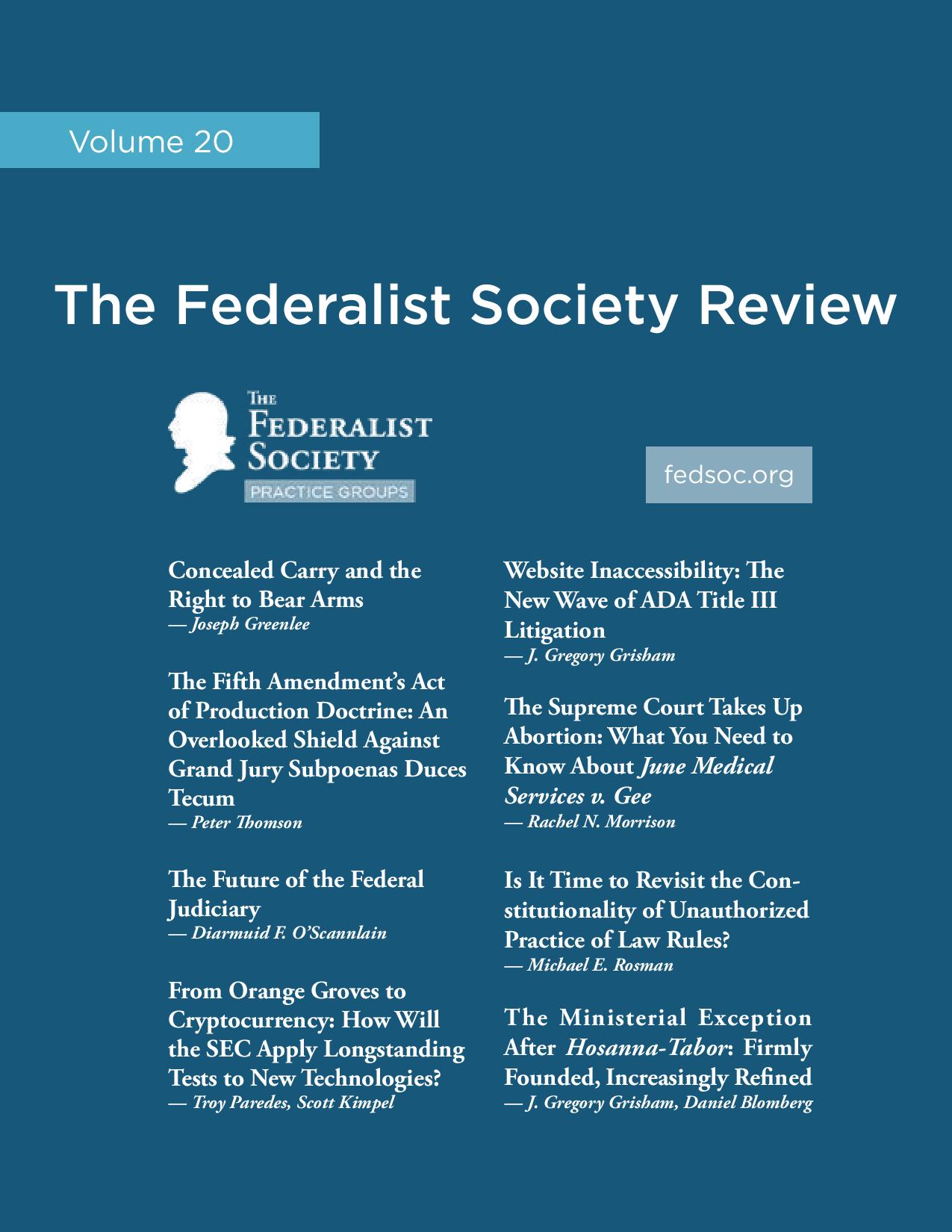