Jim brings extensive experience in federal government and economic organizations to his role as a Senior Advisor, in which he has provided economic and public guidance since 2006. He led the Office of Management and Budget (OMB) under President Ronald Reagan from 1985 to 1988, where he managed America’s trillion-dollar-plus federal budget, and the Federal Trade Commission from 1981 to 1985, where he was responsible for reforming the regulatory agency. He was also a member of the National Security Council during President Reagan’s time in office.

He later chaired The Miller Commission, an independent commission appointed to address the fiscal and economic health of the Cayman Islands, and founded consulting firm, The Cap Analysis Group, where he served as Chairman from 2003 to 2006.

Jim was chair of Citizens for a Sound Economy from 1988 to 2003. Early in his career, he was Administrator of the OMB’s Office of Information and Regulatory Affairs, where he instituted and led the first broad-scale centralized review of federal regulations. Jim was twice a candidate for U.S. Senate. 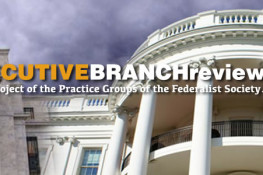 Influence of Individual Members of Congress on Agencies - Event Audio/Video

The popular press is full of reports of a renewed vigor in parts of our...